To grow businesses must scale. That means more structure. People differ though. Their personalities respond differently to structure. Thus, these attitudes trigger personality conflicts at work as businesses scale.

For instance, in small firms employees have broad duties. In large ones narrow. In short, as businesses scale job duties become more specific. Some will like broad duties better. Others will like narrow ones. The remainder will form a spectrum between the two. The spectrum of differences will look like a bell curve. 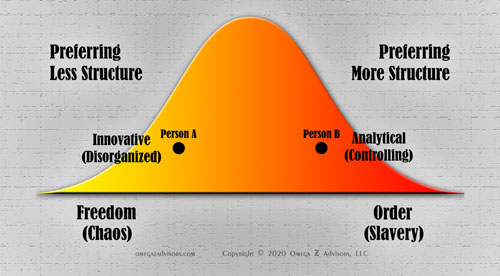 People vary greatly in their reactions to structure, so what first appears as business conflicts over organization and process are really one of personality conflicts.

This variation exists for all forms of structure: reporting lines, processes, procedures, work flows, comp plans and more. Thus, some people will resist structure because they feel it’s too much. They want more freedom, more flexibility. Others will overdo structure because they feel it’s not enough. They want more order. Again, it’s these different attitudes that trigger personality conflicts.

Unfortunately, freedom-order personality conflicts at work aren’t clear when they show up. Too often people see them as business problems, not personal ones. This means bad decisions.

For instance, take an order-oriented manager and a freedom-oriented report. The manager will likely charge the report at some point for not adhering close enough to a process. The charge might appear as failure to adhere to standards, lacking discipline.

In the reverse, a freedom-oriented manager will likely charge the order-oriented report at some point for not taking real-life factors into account well enough. The charge might appear as blindly applying “the book,” lacking common sense.

In both cases, the bad decision is reprimanding a good employee. They’re not business problems. They’re personality conflicts.

Dealing with these conflicts as personal ones, not business ones, is key though. Otherwise, personality conflicts will end up driving business decisions. In the long run, this will undermine any enterprise.