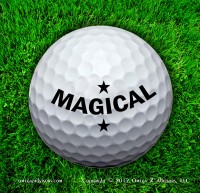 In business, we tend to discount – even ridicule – people’s superstitions. What’s the tangible connection between crossing your fingers and making a great presentation? In sports, however, superstitions seem more divine. Now, Sally Linkenauger, as written in “You’ll Golf Better If You Think Tiger Has Used Your Clubs” (Harvard Business Review, July/August 2012 edition), has found that superstitions do improve performance.

When Linkenauger told random golfers that a professional golfer had used their putter these golfers tended to putt better than those to whom she did not say this. The important point is that “people’s performance can be influenced by subtle factors” many of which we discount or ignore. While Linkenauger focuses on objects in her study, other studies in the article focused on priming people by emphasizing certain characteristics or stereotypes.

All of this follows the line of thought expressed in placebo management, the idea that there is more to the tangible and reasonable when it comes to performance. Perhaps this means we encourage people to have superstitions or, at minimum, find those characteristics in people that we can emphasize to give them more confidence and self-efficacy.

The bottom line is this: there are emotional aspects to human performance that produce positive, concrete outcomes.  These can save companies hard costs in equipment, technology, and training if they have a management team that possesses the talent, skills and training to tap into them.

Other posts in this series:

Other posts in series: Placebo Management