People find it hard liking very good people. For instance, people find the rude more powerful than the respected. Reasons for will vary. Yet, two unconscious biases link to form a basis for all of them.

People Comparing Themselves to Others

People comparing themselves to others is the first unconscious bias. It could be anything. People compare what they own such as clothing.  They compare experiences.

They compare who they know to those others’ know. Family, children, friends, contacts and others fall in this category. In the case of very good people, people compare qualities and behaviors.

These comparisons help people determine their self-worth, their social worth. This is the essence of social comparison theory. Problems occur though when people do not measure up to another person, when they do not to a very good person.

When People Do Not Measure Up to the Very Good

The second unconscious bias that makes it hard liking very good people is linked to the first. It comes in when people do not measure up in the comparison. People need to resolve the tension this creates.

This type of tension results when:

In the case of very good people, they should but they do not. They do not because they do not measure up to the goodness that person shows.

This is called cognitive dissonance. To get rid of the tension, people rationalize it away. The Aesop Fable, “Fox and Grapes,” illustrates this. 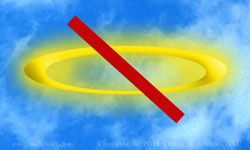 People find it hard liking very good people when they do not measure up to the very good.

The fox wanted the grapes. He repeatedly jumped to get them. He could not. He does not measure up to the task of getting the grapes. So, he thinks to himself that they were most likely sour anyway.

In the case of not measuring up to very good people, people will find very good people undesirable in some way. They will apply negative attributes to them in the same way the fox did the grapes.

Research shows these attributes would along the lines of “boring, odder and less attractive.” In short, people resolve the tension. They would need to be boring, odd and unattractive in order to be very good.

When It Is Hard Liking Very Good People

In business, when it is hard liking very good people, such as very ethical ones, they might not get the rewards that their work deserves. These two unconscious biases would just have people see them as being just “too weird” to succeed.