Networking has hit prime time in almost all our careers. This includes inside our organizations too, not just outside. How does this translate into a key internal networking strategy?

It’s easy to get lost in numbers though. Social media does not help either. The focus always seems to be on the number of friends, followers and connections.

Yet, network science shows it’s not numbers that predict career success. Rather, it’s having a variety of connections. It’s serving as a connector to diverse, segregated networks. 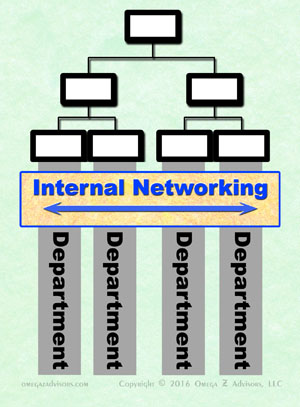 The key internal networking strategy deals with connections across areas of the organization not just those within a silo.

Moving this finding inside our organizations, we find a key internal networking strategy is to cross silos, cross departments, cross disciplines. Yes, it helps us in such things as jobs, promotions and raises. However, it also helps us do things inside the company. It helps us effect change.

This may sound easy, but it’s not. People’s normal tendency is to connect with those who are like them. It’s called homophily. People do it without thinking.

This key internal networking strategy also gives other challenges. We might feel part of no group. Moreover, these groups might not see us as dedicated to their networks.

For instance, long ago, as a Congressional intern, another office asked me to sub on their softball team. When my office found out, they thought I was a traitor even though our team would never play them or be affected by the outcome.

The same occurred for an employer. It was part of my job to network throughout the organization. Still, at times this strained relations in my department when other departments invited me to their functions.

Collaboration, like networking, has reached prime time. Internal networking is very much like collaboration. It’s collaboration across silos, departments, teams, disciplines and much more.

Ironically, many see themselves as great collaborators but poor networkers. Much of that is because networking has a selfish connotation. Collaboration seems much more altruistic.

Regardless, whether out of selfishness or altruism, this key internal networking strategy helps both. It’s because collaborators help companies implement their strategies.