Simply, the difference between innovation and creativity in business is commercialism. Innovation makes money on a large scale. Creativity does not.

The Innovation and Creativity Paradox

This difference though creates a paradox. It seems to say innovation and creativity are different. They’re not. They’re the same thing. Circumstances make them different. Thus, it’s better to look at the two as different points on the same continuum. Change is the key. 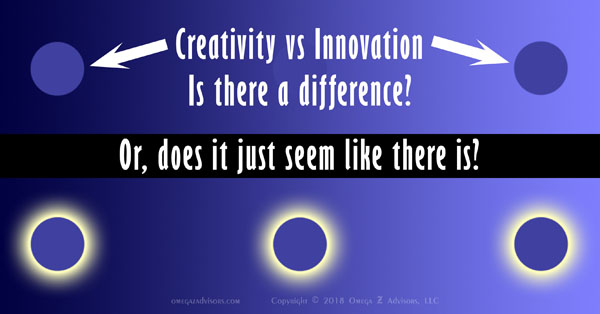 The difference between innovation and creativity in business is commercial viability. However, does this really make them different?

Three Examples of Difference Between Innovation and Creativity

For instance, take gasoline. For over fifty years it was waste product of kerosene. Then the internal combustion engine came along. Then, the car came too. Yet, both were just creative ideas until better roads came to handle faster speeds.

In short, creativity becomes innovation when things change. Take the elevator. Elisha Otis publicly introduced it in 1854. Yet, by 1860 the company that installed the first one got rid of it. People feared it. It was too slow too.

Yet, steel-frame construction, which made buildings taller, and the electric motor, which got elevators running faster, lifted the elevator from the scrap heap in 1913. Even the fearful have a tough time with more than a couple flights of stairs. Buildings of more than six stories became common.

The best modern-day case though is artificial intelligence (AI). Its current form came about in 1986. Neural networks though, the basic functional unit of AI, have origins as far back as the 1950’s.

In fact, around 1970 experts proved mathematically that such networks were useless in practice. Thus, all but a few dropped the idea of AI based on neural networks. The theory was creative. It wasn’t innovative though.

However, faster computers, more data and better algorithms changed all this. That creative 1980’s became the foundation of AI’s workings today. The idea did not change. Circumstances did.

No Difference Between Innovation And Creativity In Business

Other posts in series: Creative Innovation