The Fears Of Loss And Desires For Gain Ratio 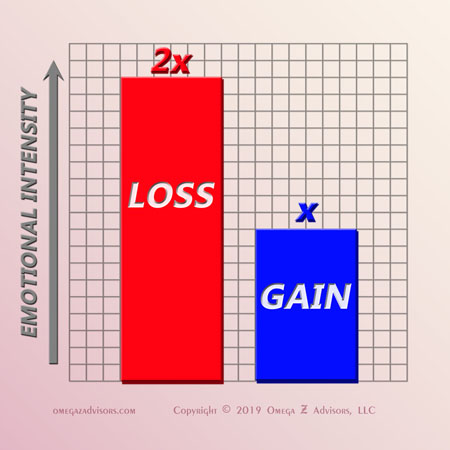 The emotional intensity from the fear of loss outweighs that of the desire for gain by two to one.

For example, the intensity of emotions wrapped around losing $20 equal that of those around gaining $40. That’s just the equal point.

Consider two things though. First, people vary. For some the ratio is greater. For some smaller. Second, two to one just balances things. This breeds wavering. Therefore, target three to one to avoid this. So, in the above example, that means going for $60, not $40.

Fear Of Loss Versus Desire For Gain, An Example

Many times this boils down to how we phrase things. Bonuses are commonly used to show this. For instance, firms usually say, “If you achieve X, we will pay you bonus $Y.” This taps the desire for gain, gaining money.

However, if we say, “We’re giving you $Y as a bonus, but if you don’t achieve X, you lose it.” This taps the fear of loss, losing money.

Now, people say the bonus, $Y, is the same in each case. Yes, true, yet the effect of both differs. Research shows people achieve X more often and by more with the fear scenario. This holds true even when people realize the bonus is the same.

Exploiting Fears Of Loss And Desires For Gains

On the surface this all means that when in doubt position an idea as attacking a loss rather than achieving a gain. It hits home harder.

In the end, remember. When exploiting people’s fears of loss and desires for gain, how we present options matters. Review the bonus example again. Yes, it helps if the numbers work too as in the tech example. Even here though, if we don’t present the loss or gain right, it won’t matter.