We can assess people’s personalities by the words they use. It’s but one way. We can use it with other ways. At work, how people use thinking and feeling words gives very useful reads of their personalities.

The Words “Think” And “Feel”

As I showed in a earlier post, we can use the words “think” and “feel” to prompt different responses from people. Asking, “What do you think about . . . ?” prompts more of an opinion supported by facts, reason or logic. Asking, “What do you feel about . . . ?” prompts a more personal response. Usually, less support exists. After all, how can one argue how another should feel?

Therefore, if the words “think” and “feel” can prompt a specific mindset, they say things about people’s personalities too. Other words help us too. Some are more thinking related. Others more feeling. 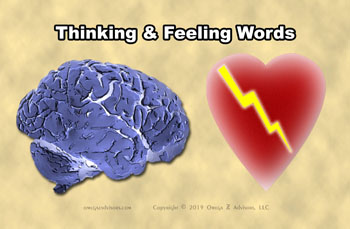 At work, how people use thinking and feeling words gives very useful reads of their personalities.

What The Thinking And Feeling Words Say About People

Of course, thinking and feelings words lie upon a spectrum. People will rest in varying degrees between the two. Blindly applying their extremes won’t work.

Other Thinking And Feeling Words

Other words convey thinking and feeling. Here are some other thinking-feeling pairings:

Many other words exist. These give an idea or feel for the words for which to listen. That’s why studying words is ongoing. In the end, it’s about patterns of speech.

Now, looking at thinking and feeling words from a higher level, three or four or even five words don’t make a pattern. Many times context affects word choice. Maybe the topic forces people use these words. It’s not a personal choice.

Sometimes it’s a matter of asking ourselves, “Are they speaking in a more detached fashion or in a more personal fashion?” “Are they more focused on things or people?” In both, the first is more in line with a thinking personality, the second a feeling one.

In The End, It’s About Emotions

This works because words have connotations. Connotations trigger emotions. Even the most objective, scientific words do this. Most times they trigger our need for security, certainty and strength.

Feeling words are more dynamic, variable and personal. Feelings can change quickly. They don’t necessarily follow one another. They differ in people. That’s why people often fear the emotions of others. They increase uncertainty.

No matter which though, in the end, assessing personalities is about listening for emotions.