Research shows that people become worse at listening as they move up in an organization. That means the worst listening problems are very likely at the top. This happens because many natural forces work to undermine leaders’ mental and emotional processes. Leadership programs don’t prep leaders for them.

All things in life go through a life-cycle. Firms do, leaders too. Just as aging is life’s way of pushing change on us, life pushes change on leaders. Natural forces exist to do this. 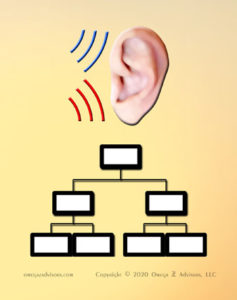 Research shows that people become worse at listening as they move up in an organization.

Power is a key natural force undermining leaders’ mental and emotional health. It causes leaders to empathize less. It causes them to think less.

Their power also affects those around them. Usually, it affects men more than women. Their power causes more people to flatter them. They become very susceptible to the flattery of underlings, especially skilled sycophants.

Leaders often have to resolve the conflict between what’s good for employees and what’s good for the business. It’s just easier to ignore the employees rather than think through this.  This force causes leaders to listen less. They don’t want to hear about these tough conflicts.

As leaders move up, they hear more and more what they want to hear from underlings. This reinforces their views. It fuels their confidence. This force causes leaders to listen less because they’re told they’re right more every day.

These three forces soften leaders’ egos. Just as muscles become weak when unchallenged, egos do too. Egos become more intolerant to those who disagree and challenge. This force feeds and compounds the others. Listening decline spirals.

Leaders Don’t Need To Listen Well To Be Leaders

Now, some simpletons will say, “Mike, a leader who doesn’t listen isn’t really a leader.” Says who? What makes a leader is purely subjective. Sometimes it only takes one person to think one is a leader to become one. Get this. Leadership has no laws. Whether a leader listens well depends on whom we’re asking.

Furthermore, there are many attributes one can have to become a leader. It’s not just dependent on listening. Yes, no doubt it helps. Still, life acts to undermine this. It’s just one way it ensures leaders fall so new and better ones rise. This keeps the lifecycle going. That’s Life’s bottom line.