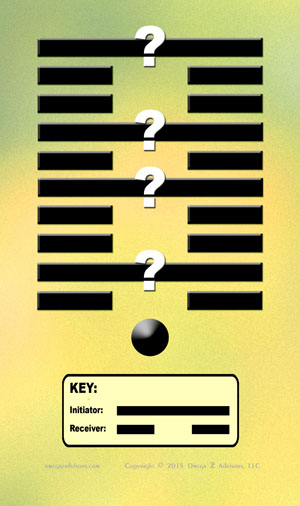 I use this schematic to help people become a better conversationalist. The solid lines represent our questions. The broken lines are the other person’s responses.

Clients sometimes have me help their employees with social skills. This is often in helping them become better conversationalists. They tend to be the ones we think of as quiet or introverted.

Even though there is tons of research on this, it is easier to do than one would think. The tips are simple. All of us can benefit from them. I first used them by accident when I visited my brother in college.

A fraternity brother wanted to entertain me until my brother showed up. I was tired. I did not talk much. He told my brother later that I was a great conversationalist. It was only later in life that I learned why these tips worked so well.

Two Things to Know When Becoming a Better Conversationalist

When I work with someone, I begin by sharing two things about becoming a better conversationalist:

This works because the focus is on them. When they talk about themselves, this triggers the same reward system in their brains as sex, food and money do. In this sense, it is like a drug.

People have a hard time focusing on anything else. They will not see that they are doing most of the talking. This does not mean we do not say anything though.

Here are the two key tips to becoming a better conversationalist:

At first people have doubts. I had one try this out on his wife. He saw how she ran with it. The clincher was when she said she was enjoying their conversations more. He worked this into his job then.

Here are some other tools I use to expand this tip:

In the end though, what we find is that not many people ask questions of others in conversations. Of course, this too helps to explain why this tip works so well.