How to bamboozle someone anytime you want is simple. Literally. Most of the tips are easy. A couple might require practice. They don’t need much thought. In fact, too much thought just makes it worse. 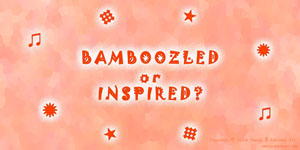 Tips on how to bamboozle someone are very similar to the ones used to make effective presentations.

When it comes to how to bamboozle someone, simplicity is the main key. People shut down when forced to think. Processing fluency (aka cognitive ease) is the psychological term for it. The rise of big data shows it too.  It shows that people struggle if there are more than one or two moving parts to a problem.

People are more likely to believe a short lie than a long truth. In this way, truth is like a joke. The more we explain it the more of a joke it becomes.

That means we avoid details. People who talk in generalities come across as more credible and powerful.

Social media has shown that going viral has little to do with accuracy or content. Even outright lies are just as likely to go viral as truths. It’s a matter of presentation. See the other tips for help here.

The more people hear it the more likely they are to believe it. This is basic teaching and advertising.

People often accept whatever an authority says. They even confess to crimes they did not commit. Even if an authority contradicts a fact they know is true, they are more likely to believe the authority. In addition to credentials, authority can come via a magical software or process.

7. Tell People What They Want to Hear

People will believe a lie they like over a truth they don’t. For instance, there is no silver bullet, but people love to hear about one. A silver bullet can even take the form of some popular expert.

Confidence is one tip that might need practice. It seduces people. Once mastered though, it covers many sins. Adding some enthusiasm and passion helps too. People are more likely to believe us if they feel we believe.

Speaking well is another tip that might need practice. People see those who do as more competent.

If all these tips on how to bamboozle someone sound familiar, they are. They’re often tips for speaking, presenting and selling.

That’s why we’ll find these tips used in the most motivational talks and the most manipulative ones. So, when we see them used, we should ask, “Are we being inspired or bamboozled?”

Of course, if the tips are done well, it’ll be hard to tell. On the other hand, it’s easier to think it won’t be. Isn’t it?