The openness personality trait of the Big Five deals with people’s view of and reaction to the new. Most definitions are very slanted. For example, they might say it’s about how “open-minded” one is. Does that mean scoring low means one is close-minded? In many cases they say “yes.”

As I mentioned in my introduction to this series, this is a big problem with the Big Five. Their descriptions imply scoring one way is better than another. In the case of openness, it’s better to score high.

This kind of focus does not help us understand one another. The focus is on who is better or worse. For example, one who is open-minded is better than one who is closed-minded. 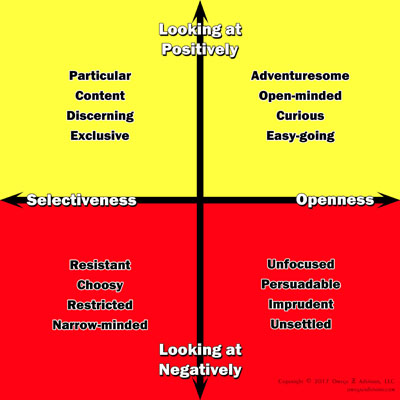 The openness personality trait has a positive opposite and some negative aspects. These are often ignored in most descriptions of this trait.

Again, using the two step approach to address this that I mentioned in my intro post, we have two questions:

Pushing openness to the extreme, one jumps on anything new. That means faddish behavior. Examples include “got to have” the newest technology and “must wear” the latest fashions. It’s not about whether either is any good or practical. It’s about whether they’re new.

So, what counter force prevents one from “gotta have” or “gotta do” whatever is in? It’s selectiveness. It’s being choosy about the new things one allows in his life.

For example, should one try drugs because they would be a new experience? Should a CEO jump on the newest business fad even though it’s high risk? Could “no” to these questions be seen as closed-minded? Of course. Yet, it also means one does not automatically see “new” as “good.”

Other ways openness could shine a bad light:

Of course, this is not to negate all the good stuff about openness. It serves to balance them. For example, take someone who scores low in the openness personality trait.

Rather than see him as closed-minded or resistant to change (as a number of descriptions write), we can now see him as more selective about what he allows in his life.

As a result, this changes how we work with him. Rather than fight him because he resists, we help him more to become comfortable with the new. In the end, this balancing of openness with selectiveness helps us understand him. That’s much better than seeing him as a bad egg