The conscientiousness personality trait of the Big Five deals with one’s self discipline. To some it’s the degree to which one can control his impulses. Planned behaviors rise above spontaneous ones.

Often experts will cite research showing conscientious people doing better at work than more spontaneous ones. A conscientious spouse can even help a lesser one succeed.

In my intro post to this series though, most descriptions of the Big Five show biases. In the case of conscientiousness, the higher one scores here the better. So, I offset this bias by: 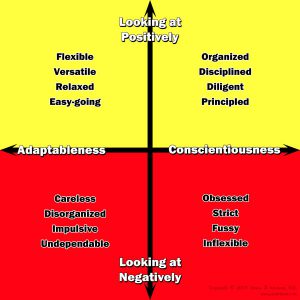 In its extreme form the conscientiousness personality trait shows up as strictness and perfectionism. That means excessively sticking to things like a plan, an objective, a process or a principle. In this sense, its extreme form is a form of obsessive compulsive behavior.

Flexibleness and adaptableness offset conscientiousness. To those loaded with the conscientiousness personality trait, this might appear as carelessness, disorganization, amoral, dishonest, chaotic, corrupt and more.

Yet, these traits prevent us from following a plan even though it’s not working. It allows us to deal with surprises, to deal with emergencies. They allow us to work with those who have different principles and morals.

Examples of Conscientiousness’ Dark Side

Other examples of conscientiousness’ dark side include:

There are times when we need conscientious work. There are times we don’t. So, rather than see someone who scores low in this trait as disorganized or impulsive, see him as flexible and adaptable. Is the plan or process really working? Should we stick with it?

As a result, rather than blindly forcing him to stick to the plan, find out what he knows, what he sees. Show what you see. Perhaps “spontaneity” can re-energize the process with a tweak here and there. There’s no point doing things right if they don’t give us the right things. Right?