Of the Big Five personality traits, the neuroticism personality trait receives the most negative press. It’s hard to find good things about those scoring high in it. It’s so much of a problem that many professionals call this trait emotional stability. After all, who wants to be called neurotic?

For instance, sources often cite those who score high in this trait are more likely to experience negative emotions. Some are more emphatic. They say such folks tend to live in a negative emotional state.

Yet, the best analogy I have for the neuroticism personality trait is the seismograph. It detects and records seismic waves from earthquakes. It’s very sensitive.

For instance, a low level earthquake won’t cause noticeable movement in a fork on a table. It will though in a seismograph. This personality trait works the same way. Those who score high are more impacted by life’s events.

Extreme Opposite of Neuroticism

To see the positive effects of the neuroticism personality trait, it helps to look at the negative of its extreme opposite. Since experts also refer to this trait as emotional stability, let’s use that. What is the dark side of extreme emotional stability? The diagram below answers this.

In this sense, extreme emotional stability is insensitivity to life. Life’s events don’t emotionally affect this type of person. He can show up as unremarkable, lethargic, apathetic and dispassionate. 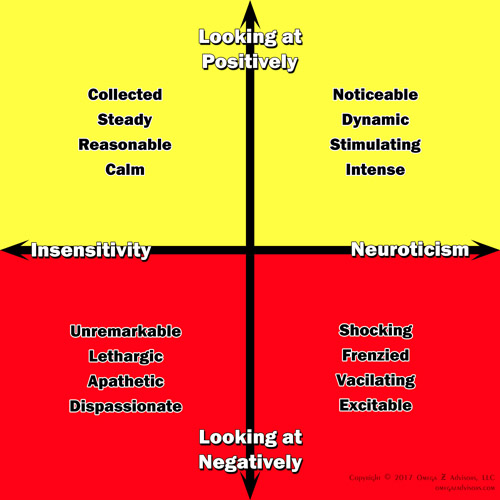 While the neuroticism personality trait might make one more susceptible to negative emotions, its sunny side also allows a more thorough enjoyment of the positive emotions generated by even the smallest pleasures of life.

If life more deeply impacts people who score high in neuroticism, then it makes sense that negative feelings would hit them harder than others. However, it also means life’s small pleasures would too. They would appreciate them more than insensitive types.

This can fuel success. For instance, a past post talks about the article, “The Science of Success.” It dives into the orchid-dandelion hypothesis and makes the connection that:

. . . some of the genes and traits generating our greatest maladies and misdeeds – depression, anxiety, hyper-aggression, a failure to focus – also underlie many of our greatest satisfactions and successes.

Neuroticism Personality Trait in the Workplace

Working with the neuroticism personality trait can be difficult. It can carry great rewards though. It’s like apple trees. They aren’t as hardy and strong as oaks, but their fruit is much better.

Apple trees need much care. Bugs destroy them more easily than they destroy oaks. The same is true with this personality trait. Much can knock it off track. As with apple trees though, managing and coaching this trait well can yield much better fruit for our labor.

Of course, when most don’t even attempt to show this trait’s sunny side, training leaders to farm this fruit only makes it harder.