Reverse psychology has many uses. Tempering extreme views is one of the lesser known ones.

The Process For Tempering Extreme Views 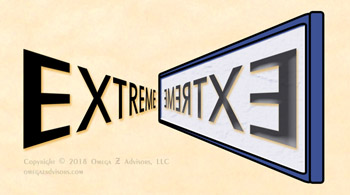 When people see themselves in the mirror, they temper their views; so in using reverse psychology to temper their extreme views we become a mirror.

The process for tempering extreme views with reverse psychology has eight steps:

Basically, this works for two reasons. First, details cause extreme views to fall. Second, people don’t like to hear their own hyperbole. This becomes acute when it’s pushed even further to the extreme. It might work in one sitting or over the terms of decision-making and planning processes too.

It can backfire too. This occurs if emotions become the focus. Strong emotions for or against will embolden the holder of the extreme view.

Here’s a simple example of tempering extreme views using reverse psychology. A business owner says, “We shouldn’t do anything now because business is real bad.”

Responding, “Yes, you’re right, business is so bad that we should not do anything now,” will temper the owner’s counter. First, it’s more extreme than his statement. Second, we become his mirror. Seeing themselves in the mirror tempers people.

Under stress, people make more extreme decisions, “black or white,” “all or nothing.” These situations are involved and can get out of hand easily. Take a production manager. He says, “We have to shut down this line and retool it. This ‘high-pri’ order has to get out.”

Responding, “Sounds good boss, let’s do it right now. I’ll just toss these other orders aside then. Right?” shows agreement, pushes it to extreme and injects reality.

Follow up responses could include, “All right, I’m good to go. I better get going and let customer service know. They’ll need alert those customers there will be a delay in their orders.”

At some point, if a practical option exists, it will show itself. We might need to propose it by saying, “To do your idea, maybe we should do . . . You think?”

Tempering Extreme Views By Being An Ally

The key in using reverse psychology to temper extreme views is to be an ally not an enemy. We do this most simply and directly by agreeing. “Yes, you’re right.” This allows us to enlist the devil’s help – who’s always hiding in the details – to inject reality, a powerful weapon in tempering extreme views.