Keeping your job might just come down to how well you use the company lingo. How? Well, remember the childhood game, “Which one doesn’t belong?” It happens in the workplace too. Words, phrases and communication style give clues as to “which ones don’t belong.”

Many studies have looked at the effect of fitting into the culture of organizations:

One theme appears to be pervasive: those who are able to fit culturally enjoy significant benefits, whether in psychological well-being, increased performance, favorable perceptions by colleagues, or likelihood or retention. (See page 20, “Discussion and Conclusion”).

To quantify this a bit, consider promotions. Those whose lingo fit the firm’s the best were almost three times more likely to receive a promotion in the first three months than the worst fits. Again, the study only looked at word choice and usage. It did not look at job performance. 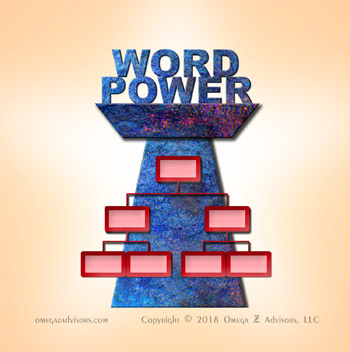 Employees – who use the words and phrases commonly used in the company’s culture in its dominant style – are more likely to keep their jobs and to get promotions.

Many things go into culture. Words are just one type. Yet, they are like music. If people hear music that they’re not used to, they tend to not like it. Likewise, if they hear communication styles that don’t fit in, they’re not apt to like them either. They’re styles that “don’t belong.”

People don’t think this though. It’s unconscious. They’ll just attribute their dislike to something else. “I don’t like her ideas,” and “He’s kind of pushy,” are examples. In other words, speaking differently from cultural norms is not “music to one’s ears.”

Therefore, keeping your job means finding the right words. There’s no time to do a thorough study of the company’s word and phrasing preferences. So, look to the leaders. The best are the fast risers, recently promoted. More senior ones might not be up to date.

Listen to them. Read their emails. Look for patterns. Run their text through tools such as wordle.net and wordcounter.net. They’ll show patterns and preferences. Track the buzzwords.

Finally, look at the connotations of the words. Are they self-interested, altruistic, innovative, routine, etc.? Remember, can you get hired in a foreign country without knowing the language? The same holds true for firms’ language preferences.